We beat the English

If  you can't beat 'em join 'em.  Or so thought Ed Joyce and Eoin Morgan.  At least Ed Joyce now plays for Ireland, but that's only because he's not considered good enough for the England team anymore.  Either way, we beat them at their own game and what a nice feeling that is.

Not only did we beat them, we also chased the highest score in world cup history, hit the fastest 100 and hit the longest 6 of the tournament so far.

To celebrate this historic win, and to say thank you to my lovely wife who surprised me with a stunning gift earlier in the day, I picked up a fine bottle of Californian Zinfandel.  To accompany the Zin, a Juan Lopez Seleccion No 2.

A fine cigar for a fine wine.  Or so I thought.  I must admit to enjoying the wine a lot more than the cigar.  Not the worst cigar but certainly not the best.  A bit too spongy and a bit too harsh into the second half.

I might have to treat myself to one of the better cigars in the humidor next.  But which one and when...hmm, some tough decisions ahead. 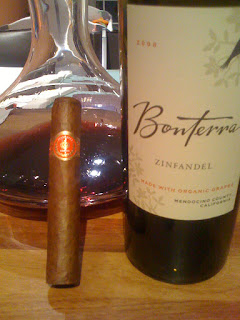 Posted by asdfasdfasdf at 08:13