The boys are back in town

The brother-in-law Gearoid, Dan the man and Sean rocked up today.  Dan and Gearoid managed to miss their flight, then booked another flight, which they also missed but luckily, they made it onto a plane at the third attempt. They nearly missed that one too.  Sean hadn't been out on the lash with them, so he managed to make it here OK.  They were all in bed by 9pm.

Gearoid brought some cigars with him,  Montecristo Puritos and Jose L Piedra Petit Cetros both in packs of 25 and both small although the Monte's looked very small.

The Cetros had been left unloved in the shop since 2008, outside of a humidor and are very brittle and dry.  I'm hoping a few months in the humidor will bring some life back into them.

I did smoke one of the Monte's.  When I first opened the box, I joked that I might have to tie them together to make a proper cigar...but after smoking one, I might just do that.  The smoke lasted around 5 or 6 minutes.  Not a lot going for it or much to say.  The only thing they might be good for is a quick smoke when out for a pint.

Big thanks to the B-I-L who does try and has brought me cigars on two occasions.  Shame they were dried up husks but that's not his fault.  I blame the airport shops.  It's not as if you can easily bring them back! 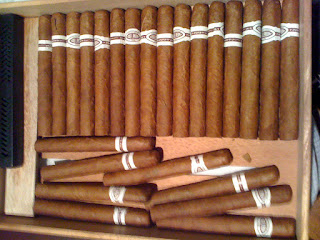 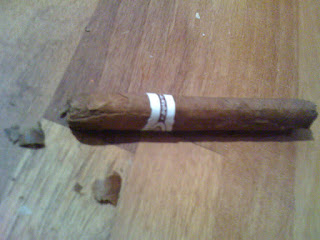 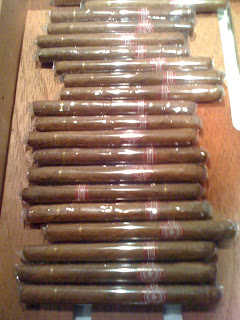 Posted by asdfasdfasdf at 14:46