The day we whooped the English

Saturday started badly.  The boy had a rash and we thought chickenpox.  So as the wife was working, I was alone in bringing the boy down to A&E.  I was obviously worried about the little fella but also a bit worried that I might miss Ireland England game.  I set the sky box to record just in case.

By 2pm, myself and the boy were on our way home, chickenpox being the diagnosis by Dr. Dave.  This meant the Englishman Bloor, who was due to view the game at ours, would be staying away, which was a shame, as I knew we would whip 'em.

After we'd seen off the English once again (don't forget the cricket), and after I had sent text messages of commiserations to every Englishman I know, I went about choosing my celebratory cigar.  I decided upon a Nub Cameroon 460.  This is by far the best looking cigar I've come across, with it's lovely dark, rich Cameroon wrapper and flawless construction.  Not the most expensive of cigars so overall, pretty good value for money so a thumbs up from me.

The boy appeared to be on the mend by bedtime so overall the day went well.  It would've been a very different story had the Irish not absolutely thumped the English.

The background picture of the cigar shot is by Tom Lewis 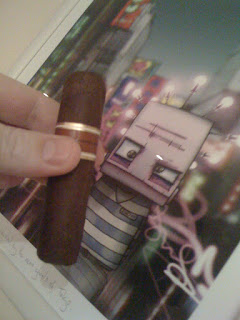 Posted by asdfasdfasdf at 05:02