Yes, England actually won something for a change today, when they beat Wales 2-0 at the Millennium Stadium.

On a happier note, England lost to Sri Lanka by 10 wickets in the cricket.

Last night I went for the Quorum Robusto that the wife picked for me.  A budget cigar from Nicaragua that looked good and felt good in the hand.  It was an OK smoke but started to fall apart and unravel in the last third.

After the disappointment of the El Rey del Mundo Choix Supreme and the disintegration of the Quorum, I decided to select something a bit more upmarket for Saturday.

The cigars I picked were both from the new stash, the Hoyo de Monterrey Epicure No. 2 for the afternoon and the Bolivar Petit Belicosos Limited Edition 2009 for the evening.  Both excellent cigars.

The Hoyo (meaning hole or depression in the ground - good for drainage) was excellent but suffered from canoeing and I had to chop this one midway through and relight it.  The same thing happened to the Boli.  Maybe this was my fault, but both cigars lit up perfectly well.  So that was 3 out of 4 cigars from the new batch with the same problem.  I can only assume that they needed to be left alone in the humidor for a couple of weeks so that moisture along the cigar becomes consistent.

The Quorum is pictured below.  A very nice cigar for the price.

The Hoyo is pictured with a fridge magnet I picked up at the Great Wall of China and the Terracotta warrior I bought in Xian.  It reminded me of my haggling skills which saved us so much money on the trip.  I got the magnet seller down to $2 from $7 but managed to get nothing off the warrior, which cost around $250.   I didn't even want the warrior but they convinced me that I did.  I suppose it's something to leave the boy and it was made from the clay. 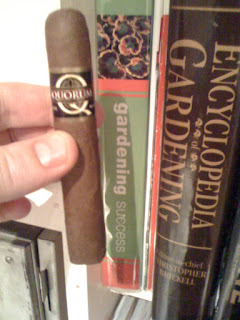 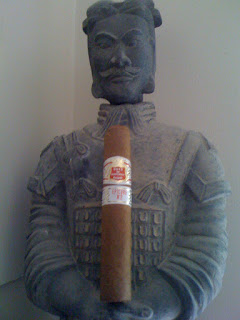 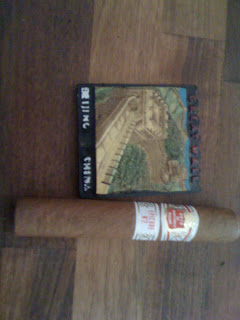 Posted by asdfasdfasdf at 14:56