First day on the new job

It was 6am before the apple of my eye finally dropped off, and so my first night on duty was a tough one.  Hopefully last night was a one off, and not a sign of whats to come over the next 3 months.  The wife must have been training him for the past year for last night.  He had 2 bottles down him, a drive in the car and some Teetha but he was still going strong, until exhaustion finally got the better of him. The poor next door neighbours were mooching all night, so guess they suffered just as much.

7:45am and the screams started again, but I blame the wife' alarm, that "beerp beerp beeerp" has to go.  Thankfully, she got him back off when my efforts failed.

8:30am and the doorbell goes.  It does the Big Ben theme tune.  I jump out of bed and rush downstairs, as the wife is expecting a delivery but as I get there, she's already signing for it.

Thank you C.Gars Ltd for today' wonderful bounty.  The humidor is no longer bare.

Time for a coffee before the Kraken wakes...nope, too late. 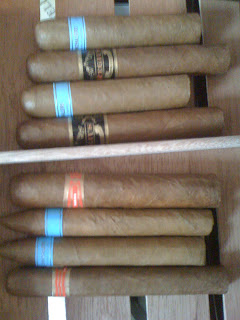