They've taken the roads in.

After a successful trip to the wilds of Connemara, we decided to take a different route and headed up the east side of Loch Corrib, towards the Galway-Mayo border.

First stop was Ashford Castle who were charging €10 to view the grounds only.  So with no access to the castle and no coffee or tea available, we decided to give it a miss.  We'd been a couple of years ago, so been there done that.  We reversed out and sped off, leaving a trail of dust and tyre smoke in our wake.

That said, there are repairs going on at Ashford Castle, which is the reason there was no access to the castle for non-residents.  It is well worth the visit if you ever have the chance.  Pierce Brosnan had his wedding here so that alone is surely reason enough.


We drove off with no real destination in mind, just a vague idea.  When I say we, I mean I had no idea.  The wife knew exactly where she wanted to go and I just did as I was told.  We crossed the Galway - Mayo border a few times, picking Finney as a good a place as any to stop off for a spot of tea and a cigar.


The road out to Finney went from two lanes to one lane to half a lane.  There were narrow bridges, wild sheep and potential death traps everywhere.  I love that sort of driving.  Rally Ireland as I like to call it.


After a hour or so dodging death, we stopped at a pub for some refreshments.  We ordered coffee and were treated to Nescafe gold blend in chipped mugs.  I fancied a pint so we ditched the coffee for two delicious pints of the black stuff.  These were lovely and if I wasn't driving, I could have happily spent the rest of the day there sinking pints.

We took our drinks to the veranda where I smoked one of the Grafton reserve cigars.  A lovely little stick that burns well and smokes well.  Can't really complain about this one.  Exclusive to the Irish market and grown from Cuban seed somewhere outside of Cuba.

The view was of the side of a mountain, beautifully cut with little streams and dotted with little sheep.  They weren't really little sheep, they were just far away.  How on earth the farmer rounds these guys up I'll never know, but he must have an army of sheep dogs to help him.  This is not a job for one man and his dog.


We called it a day and headed back to the city.


I had developed a bit of a taste for the pints so we went out early to the pub that night.  I brought one of the Vegafina Robustos that Raul the wise had given me in Dublin.  This is another lovely cigar.  A sweet Dominican which is on now my list of favourites.


So that was another nice day out in and around Galway.  It helps when the sun is shining and it was so we took full advantage. 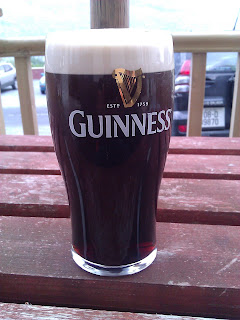 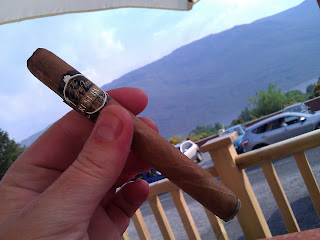 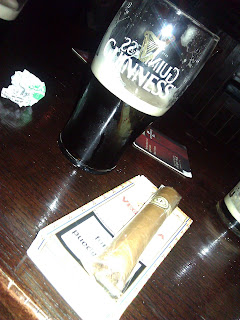