"Burn in Hell for all Eternity"

Most people stock up on drink the day before and sit at home drinking or have a party, but most people don't celebrate by staging a massive BBQ, the likes of which, Finglas has never seen.

Thankfully, the Menendez-Jevins's are not most people.  Massive steaks, huge sausages, an octopus!  Beer, Cuban rum and of course cigars aplenty.  Oh and salad.


Apart from the lovely and delicious food laid on by the Menendez-Jevins's (the MJ's from now on), Mr. MJ (a.k.a. Raul the wise) generously produced a 6 pack of Vegafina Robustos.  I brought two cigars with me, cigars I was really looking forward to sharing with Mr. MJ.

The two I brought were Luis Martinez Crystal Churchill's.  They come in a glass tube supposedly to ensure they remain in good condition.  Slight damage was visible and once out of the tube, felt extremely dry and flaky.  I cut mine and it fell apart.  Bad start.  Mr. MJ left his one alone and saved the day by handing me one of the VegaFinas.  Great cigar which I don't think is available on the English market but is on the Spanish market so I'll be buying a few of these next time I'm in Spain.

I emailed Fox of St. James's who apologised and offered a free cigar with my next purchase.  A bit presumptuous but can't complain.

The cigar was enjoyed with a great Cuban rum, pictured below.  Mr. MJ insisted I take the remaining Vegafinas home with me.  None of these cigars have made it back to the UK.  All gone.  I only hope the Churchill I left in return is enjoyed at some stage in the future. 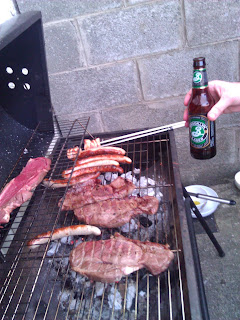 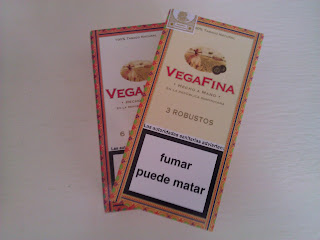 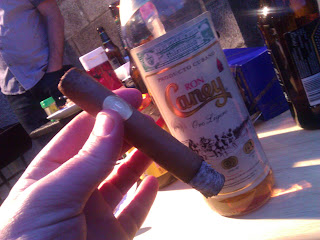 Posted by asdfasdfasdf at 13:36