The Cat who could Fly

Since arriving back from the Motherland, our baby has been up most mornings at around 4am, screaming his head off.  He starts screaming and doesn't stop until somebody picks him up and gives him a cuddle.  Mostly though, when I pick him up, he screams even louder and throws a few punches.  It's not until the wife shows up, that he stops and falls back asleep.  But, and there's always a but, as soon as we put him back down, he's off again with the screaming and the crying.

Unfortunately for me, it mostly ends with me staying up until 7am or later until he falls back to sleep and stays that way when I put him down.

Most mornings, the cat will show up looking for food or something, and always just as the baby was back to sleep.  She would pop up at the door, glare at me, then start beating the crap out of the door with her paws, while doing her own demented scream... MEEEOOOOWWWWAAAAAAAA!!!

So one morning while the cat was in full flow, I put the baby down, then slowly opened the back door while at the same time swinging my right foot at the cat's midsection.  The cat however, sensing danger, backed off and I scored a miss.  She then proceeded to run to the safety of the back garden wall.  I gave chase, grabbing the garden brush on the way.  The cat reached the top of the wall and sat there, smugly looking back at me, thinking she was safe.  Not so.  I jabbed a right with the brush and sent her flying.

I strode victoriously back to the house, hoping that none of the neighbours had been watching.

Now, before you start calling the animal cruelty police, the cat is fine and still loves me very much but you would think she might have learned a lesson, but no, she continues to spring up at the window during these sleepless sessions, on the off chance I'll let her into the house or give her food or something...then again, maybe she just likes a good chase.

I kept myself sane during the evenings with some Rocky Patels the lovely wife picked up for me in Dublin. A Rocky Patel Olde World Reserve Maduro and a non-Maduro Old World Reserve.

I've had one RP cigar in the past and I have to say I wasn't overly impressed.  These two turned out to be more of the same.  The maduro to be fair wasn't too bad but it did produce a hell of lot of brown which stained my hands and probably stained my face too.  The non-maduro was boring at best.  I don't know what it is, maybe it's my own personal taste but Rocky Patel's just don't do it for me.  If anybody out there can make recommend a good RP stick, I'd appreciate it.

Going back to the brown stain coming from the maduro.  There generally is some staining from the maduro when it gets wet, but this one was all over the place, like actually playing with brown paint.  It didn't affect the smoke and to be honest it didn't actually bother me at the time as the smoke was good enough.  In fact, it probably made the smoke more interesting than it actually was. 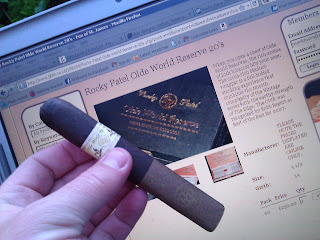 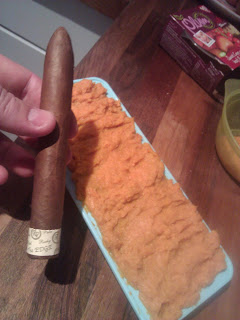 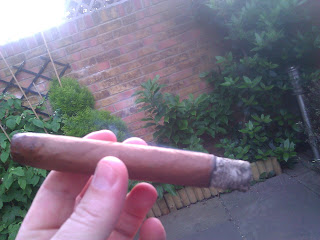 Posted by asdfasdfasdf at 07:33