Down with this sort of Smoke

While we were in Dublin recently, the wife got me a whole heap of cigars, and out of all the lovely cigars she got me, I've got one left.  Without knowing it, I think I've saved the best till last.

This cigar is not listed at any of the shops I usually buy from in UK and after googling it, it appears to be a bit of a rare find.

The cigar is an Arturo Fuente Anejo "Shark".  Stogiereview.com have done a great review, which is here Shark, but to give you a quick synopsis, it's hand rolled by just one person, a lady know as "The Shark Lady", it's released only once a year, at Christmas time, and the 7 year old wrapper spends 8 months in a cognac barrel.

After Saturday night out with the wife,  I felt like I spent 8 years in a cognac barrel.

Saturday started fine.  I went off to the driving range and hit a few golf balls.  On the way back, I eased up at a junction, letting a car out of in front of me.  A small truck behind him pulled out a bit then stopped.  I looked at him wondering why he wasn't moving...he was saying something but I couldn't hear him as I had the radio up too loud...I turned it off and heard him say "tires" and "smoke"...I continued to look at him, not comprehending what he was on about...then he shouted, loudly..."Mate, your tyres are on fire!!!"  Oops.  Now I noticed the smoke.  I switched the engine off and got out.  The tyres were not on fire but the car had dumped a bucket of transmission fluid on the road.  Not good.

With the car out of action, I needed cheering up once I got back to the house.  A cigar and a beer in the garden did the job.  The sun was out and the beer was cold which is all I really ask of my Saturday afternoons.

We had a table booked for 7pm at the Sky Lounge at the Mint hotel near the Tower of London.  The sun was still out but it was bit windy and things got nippy once the sun ducked behind the neighbouring buildings.  We managed to squeeze in a main course and a couple of drinks before the cold and wind became too much to bare.

The outside space on the roof is split into a smoking and non-smoking section which is a free for all, so you can't pre-book these tables.  It was such a lovely evening that the waiter when off and got us a table on the roof, which was a nice touch.  There's not a lot available on the food menu, but it was very tasty and really good cocktails are available.  Beers are all bottled and a bit pricey so I went for a mojito to start followed by an 8-year old Cuban rum with my Partagas Serie D No. 4 apres burger.

We found a nice secluded spot which was more sheltered from the wind, away from the table area and we took in the view while I enjoyed the cigar.

The food at the Mint was lovely.  My burger was delicious, juicy and big.  The wife had an Asian salad that was just as tasty.  I think we have a new venue for the Doyles next time they visit, but I'd recommend the mint for lunch rather than dinner.


After the Mint, we headed off to the local pub for few more pints and another Partagas for me.

The Partagas cigars were from a box of 10 picked up in Switzerland for me by @JimmyBloor.  Lovely cigars which are in great shape.  The No.4 is one of my favourites, introduced to me in Luxembourg and a cigar that has never let me down.  The burn is probably a bit quick, then again, maybe it's an indoor cigar rather than outdoor but I've noticed a significant difference in smoking time between the No. 4 and a Ramon Allones Specially selected.  That could be down to weather conditions or something else with the cigars, I don't really know but I think I'll have to continue with my research just to be sure.

I think that's it for us as far as nights out go.  The pain of the hangover the following day is too much, especially at our age, then having to deal with a baby who doesn't care about such things.

Many thanks to Nora the babysitter who took care of the boy while we were out enjoying ourselves. 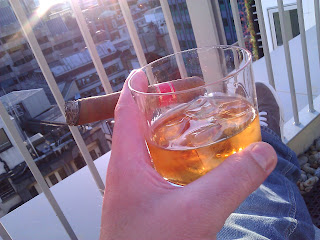 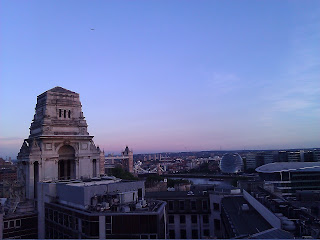 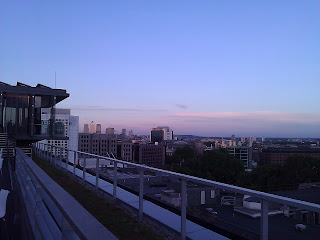