Prawn to be Wild II 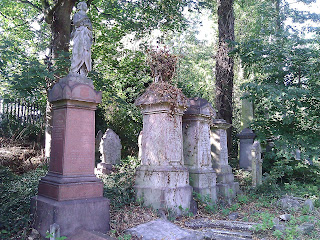 The footpaths leading you around Abney park, take you past the Victorian and war era graves that dominate the place.  There are a few more recent graves to be seen, with some bright plastic flowers standing out amongst the greenery.

The landmarks are a derelict central chapel, a cross of sacrifice and a statue of Dr. Isaac Watts.  Nature has taken hold but most of the epitaph engravings are visible and easily read.  The walk around is very pleasant, with a few dog walkers and homeless people here and there.  It's a thought provoking and poignant walk, the antithesis of Billingsgate.  It seemed to contain a lot of young people (the ground that is), but I suppose times were different back then.  Some are memorials to war dead, buried in France or where they fell, others list whole generations of families that are now long gone.  One stood out which appeared to belong to a family who all died on the same day.  The date gives a clue as to what probably happened.


Overall, Abney Park was a very nice start to the cemetery trail.  Once we completed the circuit, we left the cemetery at the small side entrance on Stoke Newington Church Street.  I'd never been up this way before and was pleasantly surprised by how nice the place is, and by the number of coffee shops.  Lots of coffee shops, everywhere, but not a Starbucks in sight.  Cake shops too.  The cake shops sell coffee.

It was still only 9:20am when we left Abney Park and we'd been up since 5.  I got a text alert from work at 2:30am, and then the baby woke up at 3am until 4am, so I was pretty knackered by the time I met Jim.  Jim didn't sleep either, probably too excited. 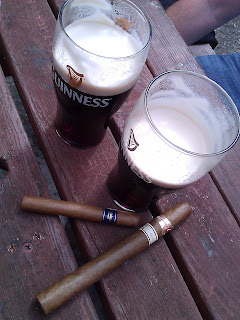 Next up was a pint and a cigar.  I had a Ramon Allones Gigantes Double corona, one I've been looking forward to since picking it up in Luxembourg.  James had a Santa Damiana cigar Panatella.

Unfortunately though, a suitable smoking venue (i.e. a pub) was not going to be available until midday.  So we had a coffee.  I had a Danish. Then we had a walk.  Then we had a sit down.  Then we had another walk.  Then I met my next door neighbour.  Then we walked some more.  Then at 11am, we tried a Irish bar called the Auld Shillelagh, which had just opened so in we went.

The pub had a decent beer garden out back so we decided to stay there for the cigars.  The sun was getting hot and the beer was lovely.  Probably the best pint of Guinness I've had outside of Dublin.  To be honest, this is as good as any pint I've had anywhere in Ireland.

The cigar was a triumph.  Great value at €14 and everything about it was perfect.  Even Jim commented that it smelled lovely.  It only needed a cut and re-light once and I went right down to the nub of the nub.  More of these will be bought the next time we visit the Doyle's in Luxembourg (if they'll have us).  The construction was flawless, the burn near perfect and the smoke deeply satisfying.  10/10.

I hoped this cigar would never end, but end it did.  We left the pub and got as far as the High street where we had one more for the road.

I took the bus home feeling a little bit worse for wear but in good spirits.


Abney Park is a great place to spend a few hours and worth a revisit some day.  It sets things up nicely for the next cemetery on the magnificent seven trail.  I'll need to have a good cigar for each one, a cigar that gives a fitting tribute to those gone before us.

I'll finish off the day next time because it didn't end there.  Not by a long chalk.

Posted by asdfasdfasdf at 13:07