Prawn to be Wild

Billingsgate fish market, 5:30 Saturday morning and myself and Jim pulled into what has to be the busiest car park in England for the time of day.  The place was packed with people rushing back to their cars, all laden with black sacks, mostly restaurant bound we thought.  Chinese, Japanese, African, Indian and Mediterranean, maybe even a few fish 'n' chip shops. 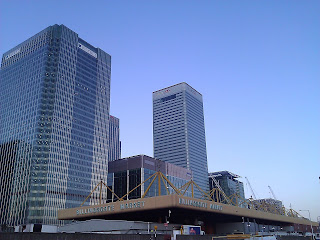 After struggling to find a spot to park, we were soon knee deep in fish guts and market types.  I lie, there were no fish guts.  The place was clean and busy, full of people and all sort of delights of the sea.  Some huge shark like things, enormous crabs, lobsters, shrimp, big fish, little fish, and of course, the famous white coated fish traders.  The men and women who take no prisoners and take the legs and ankles of any dawdlers.

I dawdled and a trolley smashed into the back of my left leg.  It hurt but I didn't let it show.

Two boxes of Ecuadorian shrimp made their way into my possession before we headed back outside and home for breakfast.

I was actually given the wrong bag and nearly made off with a sack full of tuna but I only got a few feet before the guy called me back.


Next time I think we'll pick up a couple of lobsters and I might also learn how to gut a fish and get a sack full.

Those of you that can make it to Billingsgate should make the effort.  It's a great experience and not as scary as I thought it was going to be.  It is very busy but the sellers are all friendly and the quality of fish, for what you pay, is the best you're going to get.  The boxes I bought had roughly 50+ delicious good sized shrimp at £24 per box.  The last time I bought shrimp at Waitrose, they cost over £1 each.  We cooked up some for dinner yesterday and they are great.

After dropping the haul at my place, we took some Dublin white pudding and drove up to Jim's for pudding on toast.

With our bellies full, we walked to the first cemetery of seven that we intend to visit over the coming months or years.  Abney Park which was opened in 1840 as a non-denominational cemetery and garden park.

The cigar I went for was a Ramon Allones Gigantes Double Carona.  One of the best cigars I've ever had.

I'm going to break the day into three or four parts as there's a lot to cover, and leave Abney park and the cigars for now.  Below are some pictures from a great day out.  We had great food, lovely Guinness, fantastic cigars, sunshine and adventure.

I only took one photo of Billingsgate but Jim has one that I'll get off him and post in a later blog.   That said, the best way to see it is to actually go to it.  I'll definitely be going back and highly recommend it.


I've got lots of photos of Abney Park which should make up for it.