A small slip of the Tongue

Then, in the blinking of an eye, I'm a idiot.  One word is all it took.  One single word.

The word my brain chose to share with the rest of the room was breast.

Well, my brain decided to combine the two words I was going to say, into one word, probably to save time or something.  I was planning on saying "best practice" but I came out with "breast" instead.

Anyway, before the madness of today kicked in, I did enjoy some great cigars, starting off on Friday night with a favourite, a Oliva Serie V Double Robusto.  A great cigar that has never let me down, unlike my choice of words.

I just started on a Partagas Serie P when I got a call from Rob who was in a nearby pub.  Rob suggested I join him for a quick snifter.  I did and several quick snifters later, I was tucked up in bed while Rob was sitting at the wrong train station waiting for his heavily pregnant wife to pick him up.  Good lad Rob.

See, some things are worse than an inappropriate word.

After golf with Rob early on Saturday morning, I was looking forward to some more cigars (to celebrate the win).

Smoke number one was a Sancho Panza.  A new Cuban for me I think.  A fine looking cigar, long and lean with a lovely shinny light brown wrapper.  Pre-light draw was a bit tight which was a sign of things to come.  The cigar was nice but very tight all the way through.  It was hard work if I'm honest and disappointing.

A Bolivar followed the Sancho Panza.  Now this cigar was what I was hoping for, with a great draw and ample smoke.  Great flavours and a terrific burn all the way to the nub.  I like Bolivars.  Not as pretty as the San Pan but for me, a much more enjoyable smoke.

We also had fairy cakes baked up by the wife, dipped in jam and rolled in coconut.  Lovely. 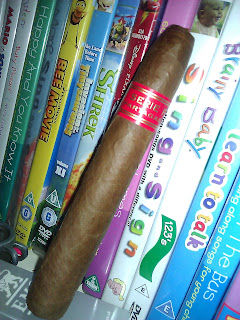 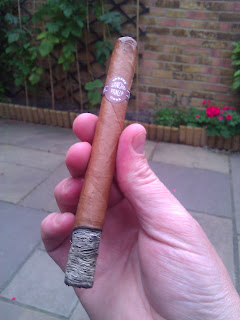 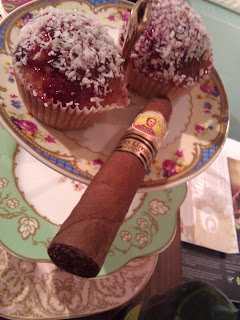 Posted by asdfasdfasdf at 14:50