Prawn to be Wild III

After I made it home from a great morning and afternoon out with Jim, I cooked up some of the morning catch, after which I lit up a Partagas Culebra.  Once again, this cigar was excellent.  I've now had one box since getting back from Luxembourg which leaves 2 boxes still in the humidor.  Plenty.  They really are one of the best and easy going cigars  I've come across, and they look brilliant. 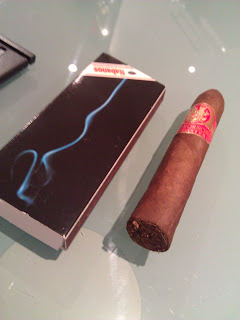 I actually started off last weekend with a new cigar on the Friday evening, a Winston Churchill Lancaster by Davidoff.  I was expecting something good here, because of the name, a fine name, but it wasn't good, it was terrible.  I dumped it before even reaching the half way point, it was that bad.  Maybe the remaining ones will age well.  I hope so, because they're about to spend a long time in the humidor.

Matt and Rocket dropped by Friday evening.  Both fine chaps who hail from this neck of the woods.  Matt lives over in America these days, San Francisco in fact.  A great place which we hope to get back to one day, although next time, I'll be hunting down some cigar shops as well as imbibing lots of lovely Californian wine.


After lunch, we made out way to the annual Hackney Wick art festival.  One of our friends has a studio over there where she designs and makes clothes.  Here's the link to Ashling's website, so be sure to check it out.

While we were there, I had a Partagas Serie D No. 4.  The Serie D was a perfect cigar for the chilled out atmosphere of the art festival.

We picked up some beigels on Brick Lane on the way home, which topped off long and eventful day.  I recommend the salt beef with ketchup.


I'm already putting a plan together for the next  magnificent 7 cemetery day, which for one, will most definitely not be starting at stupid o'clock in the morning.

Posted by asdfasdfasdf at 07:46