The most anticipated weekend of the year happened last weekend.  Myself and the wife were off to Luxembourg to enjoy music, drink, laughter and craic, cigars, dancing and singing with the Doyle's, Raul the wise and his lovely wife, Kaz the Acrobat.

The story starts on Friday then continues through Saturday and Sunday, to a grandstand finish on Monday, so because it's a bit of a long one, I'm going to break this blog into two pieces.

There were ups and downs along the way, with the downs being gravity related, which is never a good thing.  There was bruises galore, music galore, beers galore, rum galore, champagne galore, not sure if there was whiskey galore but I do remember the Mojitos galore.  There was food galore and of course, there were cigars galore.

So Friday night, and we get to the Doyle's around 9:45pm after being chauffeured from the airport by Mr. Doyle in his lovely Merc.  Rolo and Kaz were already there and so was Barney and Rima, but they didn't stay long, as Barney had to fly to Hong Kong the following day (for 4 weeks).  Jealous? Who me? I'm not jealous.  Barney wasn't supposed to be there so he missed out this time.  Next time I'll bring something special just for him, if I'm ever invited back that is.

As far as the cigars went, I only brought a few cigars with me as I knew we'd be cigar shopping the following day, so all I had were 3 x Oliva Serie V Double robustos and a Cohiba Siglo 6 for myself.  Doyler had some VegaFinas and Rolo brought some R&J's No.2.s.

We went for the VegaFina Sumum edicion especial 2010 as the first cigar of the weekend.  These cigars came tubed in a nice big square box, with a metal effect.  The cigars were flawless to smoke, looked good and smoked good.  A good cigar to start off the weekend and a winning selection by Mr. Doyle.

Before the cigars, we were treated to some lovely chicken fajitas prepared by Mrs. Doyle.  So with food, a cigar and some alcohol inside us, we followed the ladies (who had deserted us) to see Grandmaster Flash in action at the Luxembourg Philharmonie.  We got there just in time to see the great man dish out the rules of the night...

Rule Number 1 - Put your hands in the air
Rule Number 2 - Make some noise
Rule Number 3 - Sing along if you know the words...

So with the rules out of the way, we proceeded to jump around to the merry tunes of "99 Luftballons", "Come on Eileen" and other disco classics such as "Ice ice Baby".

To be fair, he did play some great tunes, (99 Red balloons is a classic after all) but the good ones would last seconds before the Grandmaster shouted at us to put our hands in the air like we didn't really care.  Some people (Rolo) didn't really care and stuck something else in the air instead.

After GMF, we retired back to the Doyle's and after a few more drinks (I think) and some proper tunes, we called it a night.

Saturday began with mild hangovers and a hearty breakfast courtesy of the Doyle's and the glorious food brought over from Ireland by Kaz and Rolo.

Fed and watered, we headed off into town.  The mission for the day?  Cigars for the boys, shopping for the girls.

Opposite the bus stop, Doyler suggested we take some of those hire bikes available in most good cities, so we did.  The girls, on the other hand didn't.  They took the bus.  A short time and no accidents later, we were all back together again and making our way to the shops.  We picked up some cigars along the way, in a nice little shop with a small walk in humidor.  I went for a Cohiba, Doyler a H. Upmann and Rolo a Cuaba.

Soon the girls were kissing us goodbye, and we were on our way to a bar, when Rolo suggested we pick up a Partagas Culebra, one of those strange looking cigars that are bound together.  Well that seemed like a master plan so we picked up a box and then made our way to the pub.  Sorted.

The Culebra has 3 cigars wrapped together, bound in a red ribbon.  The cigars came out with a touch of green mould which brushed off and is probably normal.  They simply look fantastic when bound but once taken apart, individually they look like a something I might have rolled myself and then sat on for a few days.  Despite the look however, the smoke was perfect.  Generous, lovely smoke that stayed exactly the same from start till finish.  A mild cigar but not weak in any way and an absolute pleasure to smoke.  I think it's safe to say it that the three amigos loved every second and at around €16 for the box of 3, it's a steal.

The girls arrived back about mid way through and after the cigars were gone, we headed off for some food, but not before heading back to the cigar shop where I picked up another 3 boxes of Culebras and another big stick that made it safely through the weekend, so I'll save that for another day.

After food and a glass or two of wine, we set off once again on the bikes and the girls set off on the bus.

It's thirsty work, pedaling bikes around the place so we stopped off for some refreshments before we were due back at the house.  We probably stayed a bit too long as Mr. Doyle noticed he had missed 5 calls from Mrs. Doyle so with a couple of beers inside us, we resumed our journey home.

A short time later, and only minutes from home, disaster struck.  The Doyle was down and out.  Thrown from his bike in what can only be described as a freak accident.  His brakes must have failed as he glanced my back wheel, sending him flying to the ground with enough force to break his collar bone in two.  I stopped as Rolo carried on, no doubt to ensure parking spaces were available for us further down the hill as this was our primary concern before Doyler hit the deck.

Doyle was in a bad way, so much so that his face turned green then grey then green again.  A trip to the hospital was all we could do.

A few hours later and Doyle was back home, in pain, on painkillers, not blaming anybody for what happened.  Brave man.

That was pretty much that for Saturday.  Everybody was tired and worn out by events and we had a big day ahead on Sunday.  A barbecue and Rock-a-field, more drinking and more cigars to get through, we needed our rest.

I didn't sleep.  Doyler didn't sleep.  While he struggled with the agonising pain of a broken bone, I was kept awake by the nagging feeling that I might be partly to blame...

At the time of writing, Doyle has had an operation to fix his shoulder and is doing well.  So no harm done. 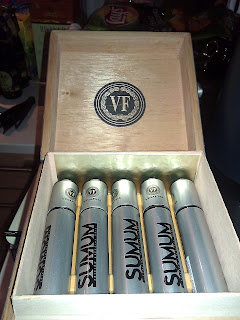 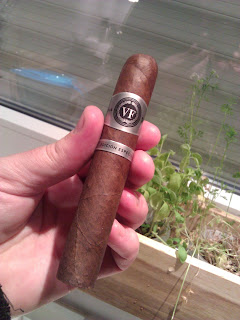 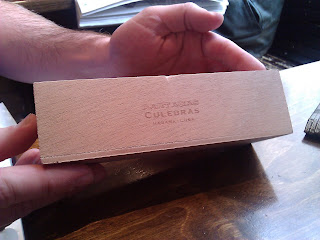 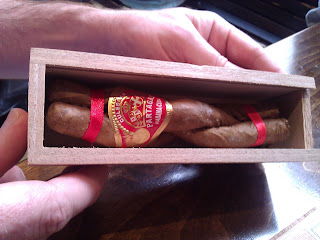 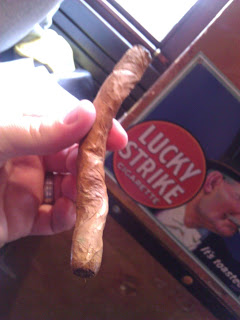