I'm here in the garden, the sun is once again shining on my scruffy unshaven face and the Babai sleeps.

We had a nice little walk up by Brick Lane.  The usual amounts of addicts, yobs and Shoreditch darlings going about their business.  As we walked past Brick Lane, one of those van/car types pulled into a spot beside me, or rather it stopped at a 30 degree angle to the footpath, with the back end around 4 feet from the kerb.

The passenger gets out, turns around and inspects the position of the car.  Mutters something to himself, then as the driver gets out, he says something to him in Polish.  Now I don't speak Polish but I think he said something along the lines of "em...I think you might need to straighten up a bit..." or "Eh, are you stoned or something?  Straighten the f**k up!".

It wasn't really a loud cheer from the crowd.  It was the owner of the parked car who didn't look too impressed.  The unimpressed man said something in Bengali to which the Polish guy replies in Polish.  A few hard stares later, they all bugger off.

The baby must have fallen asleep half way through so I doubled back to the house for a cigar and a cuppa.

I went for the the El Ray del Mundo which translates to King of the world.  I chose this one because it looked like an afternoon kind of smoke and felt good in the hand.  Springy and ripe for smoking and one the wife got me.

It started off a bit tight but lit well.  Then, minutes later, a big runner down one side.  Runners are caused by veins in the wrapper and this one had a fairly big one running the length.  This runner then turned nasty, into what I believe is know as canoeing, with the cigar burning down one side and not the other.  I let the cigar rest until it was out then cut the burnt end off.  I then blew through the cigar to expel all smoke, which there was a lot of and then torched it up again.  I read that blowing out the old smoke is important so the taste is not ruined when relighting a cigar.

It's been on the go for 15 minutes now and looks and tastes fine, so not much damage done but it still has a bit of canoeing going on.  Oh well.  Shit happens.


Just as I thought the cigar had settled, it went out.  This time it suffered from tunneling, where the cigar burns quicker on the inside than the outside.  Another cut and clean and its going again but a shame that it's turning out to be a bit of a chore. 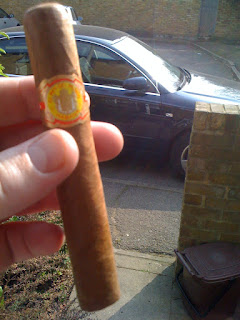 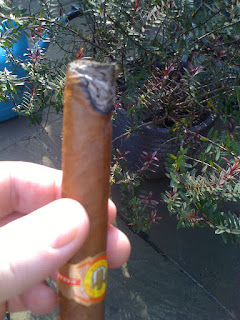 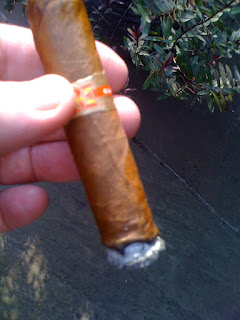 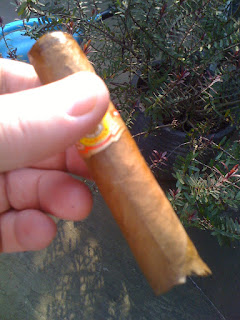 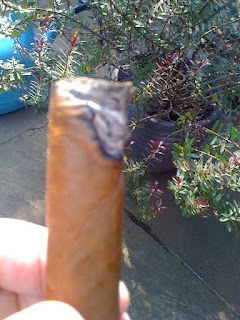