Last of the Spring Cigars

Roll on the Summer cigars!

I'll remember Spring 2011 for a number of reasons.  The number one memory will always be the 3 months off work spent with the baby, which goes without saying was the best thing ever.

Another great memory I'll take from it is the many cigars I've enjoyed.  Not just the cigars, but everything that went with smoking them.

I've got one weekend left and weather permitting, I'll get to enjoy a few more before I have to rejoin the rat race, which brings me to the final care package which arrived this morning.

Fox's of St. James threw in an additional cigar to make up for the disappointment of the last order.  It looks like an Oliva Serie V Maduro Short Robusto, Edicion Europa 2010 to be precise.  I think they've made up for it with that.

The picture below shows the stash, with the complimentary cigar on the left.  The God of Fire beside it will be left alone for a while and so that leaves an Ashton VSG and a Oliva Double Robusto for the weekend.  I like to start my weekends on a Thursday.

The weather today has been mostly torrential downpours with high winds and lightning.  Great fun but not conducive to cigar smoking.  Thankfully though, there was a lull in the onslaught and I took full advantage.

I knew it would be a small window of opportunity so I went for the free cigar, which is smaller than the rest.  It didn't disappoint but things got a bit cold in the garden.  This weather we're having caused flights to be cancelled at Heathrow but it didn't stop me giving it a go.

The cigar needed a bit of coaxing to get going but only needed touching up once.  A good burn after an early fail but the weather conditions didn't help and it was slightly damaged, see pic below.  The draw was a bit tight throughout but not too bad and it did produce a decent amount of smoke.  All in all, OK but I don't think I'd go and buy any of these as I think there's better cigars out there for the price, which is around £12.  I much prefer the Luis Martinez Churchill it replaced and that was a snip at £10 a pop.

Here's hoping the weather improves for the weekend. 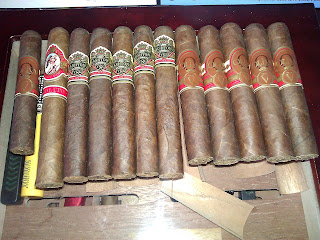 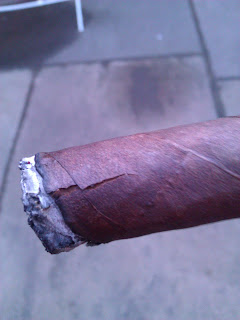