The second game of golf played on the trip home to Ireland was at the K Club with Mikkel, my old friend and golfing rival.  I nearly always meet up with Mikkel for a game of golf when home in Ireland, a tradition stretching back about 8 years or so now.

This was the first time I smoked a cigar on a golf course and it wasn't that easy.  Well the smoking part was easy but lighting wasn't. The course is described as an inland links, which basically means that wind is pretty much a permanent feature.  Thankfully though, it wasn't a particularly windy day.  It was actually quite mild but it still took 6 or 7 attempts to get the cigars going.

When we arrived at the K Club, for some reason we struggled to find parking, even though we were actually in the car park.  All the spaces appeared to be reserved for members.  All members appeared to be elsewhere so we parked up and went inside.  We left shortly thereafter as we had selected the wrong course and had to drive back the way we came.  In the car park, K Club security had pulled up alongside my car but they made off as soon as they saw us coming.  Lucky for them.

We had no problem find a parking space at the Smurfit course, which by the way, is not the one the Ryder cup was played on, but a pretty course all the same.  Not too long with some nice holes and I somehow managed to score 36 points while playing off 20.  Mikkel was a little bit behind on the score sheet, which basically means he lost the last golf day between us on Irish soil.  I think we're about even now, but the trophy (pictured below) stays with me.

As the title of this blog suggests, somebody's going to America and isn't me.

Best of luck to Mikkel and his family as they up sticks and head across the pond.  This of course means that the golf rivalry will have to recommence on American soil.  Maybe we'll do it Ryder cup style but I somehow doubt Ireland will be hosting it again.

The cigars I went for were a Grafton reserve and a Juan Lopez Havana.  The Grafton is only available on the Irish market.  A great little cigar.  Perfect burn and smoke.  I bought a few of these over in Dublin and really like them.  Mikkel had the Grafton.  I had the Juan Lopez which was OK but not great.  Maybe it was a bit too windy to really enjoy the cigar.  Next time I'll save the cigar smoking until after golf with a pint of Guinness.

I wasn't the slightest bit sad that this was my last golf day in Ireland with Mikkel, which is not to say he and his family will not be missed.  I was just very happy for them and so wish them the best of luck on their new adventure to America, which no doubt will be an exciting and amazing experience for them and the kids. 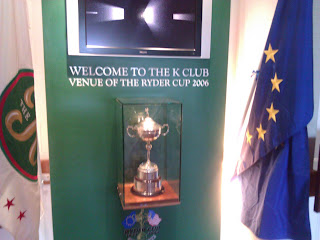 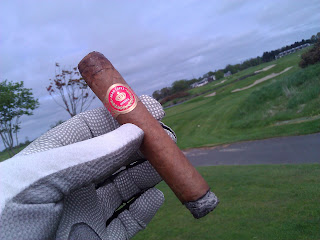