Since returning to London, I have not been a well man.  Cough, cold, shivers, sweats, blocked nose, runny nose, sore throat, more coughs.

So no work for me this week and more importantly, no cigars.

I don't mind not working but I'd rather be in work and feeling good than feeling as bad as this.  It's a bit more than man-flu.  I'd say it's proper flu.  Feels like it.

So with no cigars, what is there to talk about?

Not a lot obviously, but I can always plan ahead.

The plan for this weekend was to head to Billingsgate fish market with Mr. Bloor, then visit one of London's Victorian graveyards, then a pint and a cigar at a local bar.  As plans go, this is arguably one of the best plans of all time, unfortunately though, it's been put on hold due to the arrival on English soil of both my parents, this Friday.

So Bloor is blown out and golf with my Dad is blown in.  I actually thought my Mother and Sister were coming to visit, not my Dad so that's why I originally made plans with Bloor.

Now I know my Dad likes a cigar but I don't think he has one very often so I'm hoping he might join me for one on Saturday.  He'll have a few to choose from but I think it might be a Culebra for the old man and me, apres golf.

With a 7:31am tee time, everything will be apres golf on Saturday.  It'll be a 6am alarm call to begin with so I'm just hoping I'm fit enough to get out of bed, let alone fit enough to give him a test on the golf course and then fit enough to enjoy a cigar and a beer in the garden later.  (Hello Mammy, I know you're reading this and yes, that is the plan).

To be honest, the golf with my Dad is more important than the cigar.  Obviously there's a bit of competition there.  My Dad is in his early 60's now and not the single handicapper he once was.  He's still very hard to beat and I've only managed it a few times over the years, even if I had to wait until he broke both wrists and almost severed a finger before I had my first victory.

He broke his wrists making toast. And tea.  The tea had nothing to do with it though.  It was the toasts fault.  Well actually it wasn't the toasts fault, it was the butters fault.  He slipped on the butter you see.  But the butter wouldn't have been there in the first place if it wasn't for the toast.  That's how accidents happen.  Easy isn't it.

He didn't do the finger slicing at the same time.  He waited a year before doing that to himself.


Anyway, I did have a couple of cigars before the lurgy kicked in, a Romeo y Julieta Limited Edition 2004 and one of my favourites, a Raman Allones Specially selected.

The Romeo was bought over in Luxembourg and one that doesn't appear to be available in the UK.  A great cigar, lovely to look at and hold, with a springy feel to it.  The foot was slightly damaged but otherwise, it was perfect.  I started this one around 12:30 last Saturday afternoon, and even though I thought it might be a bit early for something so big, it was fine.  The cigar started off well enough but needed a bit of touching up every now and then.  Half way through and I had to cut it, not ideal but it was such a lovely cigar, this was fine with me.

More touch ups and another cut later, the cigar was coming to an end.  To be fair, I probably should have left this one in the humidor for a while but I enjoyed it and it kept me busy so why not.

The RASS was a bit weird.  Maybe it's the weather but this one did seem a bit heavy and more spongy then normal.  It also went out a few times and didn't burn straight.  Still very enjoyable but got me wondering if something was not right with the humidor although it's probably just the weather. 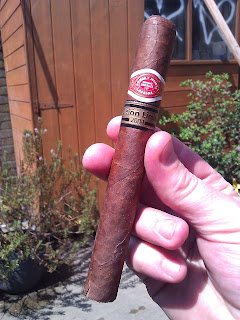 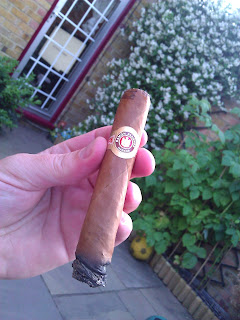 Posted by asdfasdfasdf at 15:29