After almost 3 weeks of the flu, I'm beginning to wonder if I'll ever get rid.  It's putting a serious crimp on my cigar smoking time.

Poor me I know but it's the cigars I worry about.  They're not going to smoke themselves you know.

One good thing to come from it though, is that the volume of cigars in the humidor hasn't diminished much, mostly due to some unexpected and much appreciated donations.

My Dad brought over two cigars that originated in Vegas.  One was damaged and fit for the bin but the other looked good enough so it's taken its place in the humidor.  A stripey stick, like a barbers pole but with brown stripes instead of red and white.  No band on the cigar but he did give me a card from the shop, but I lost it.  I also got some matches from Binion's, which was nice.

Then last week, Ina (Sister-in-law) brought a Santa Damiana Panatella and a Vasco Da Gama Whisky Cigar Corona.  I've had a few Damiana's in the past and thought they were alright, so no complains there.  The Vasco is a totally new one on me with some sort of whiskey infusion so that should be interesting.  I'm not going to let that one sit for too long, no longer than a couple of weeks, before I see what it's all about.

I did struggle through the pain on Saturday and in support of Darren Clarke, I decided a Cohiba was in order.  Had to be done and glad I did too, as it paid off and he won the Open.  You're welcome.

The Cohiba in question was a Coronas Especiales.  A smaller ring gauge to what I normally prefer, but as I only had two Cohibas to chose from, this one and a much bigger one, the smaller one seemed the sensible choice, seeing as it was chucking it down outside.

With little chance of a break in the weather, I decided to have everything ready just in case the rain stopped.  Cigar, beer and umbrella.  Hmm, not enough beer.

Anyway, God must have sat up and took notice because just as I was giving up, the sun broke through the misery and I got to work on the Coronas Especiales.  A great cigar this, one the wife got me about 4 or 5 weeks back.  Smooth and yummy, full of smoke with a perfect draw.  This is a powerful little stick and one that I would highly recommend.  A great burn and great value. When it comes to price, the Cohiba are always a little bit more expensive but you get what you pay for, and the quailty stands out.

About mid way through and the rain was back.  So with umbrella up, I sat alone in the garden, happy with just my little Cohiba to keep me company.  Thank God for Cohibas and golf umbrellas.

That's about it for now.  A short update I know but as I've said, health and the weather are not on my side.  I'm hoping I'll be fit enough by the weekend to enjoy a special stick that was picked up in Luxembourg.  Even if I don't smoke it, I might put a picture up because this is something worth sharing with the world either way.  Golf with Rob is booked for 7:30am Saturday so heres hoping the weather sorts itself out by then.

I'll do an update on the boy in the next blog.  I know that's the only reason some of you read my blog.  He's becoming obsessed with cars.  No idea where he gets this obsessive behaviour from but we'll discuss it next time. Until then. 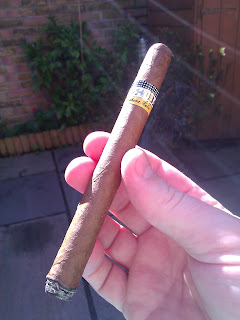 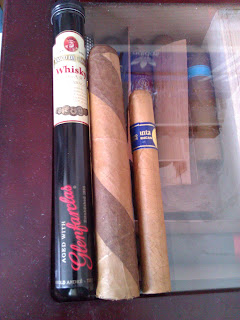