I know, I know, it's been ages since my last blog, but truth be told, a lot has been happening in and around the streets of London recently, and I myself have been busy with all sorts of things and stuff.

Now that the Olympic and Paralympic games have finally ended, I decided it was time to get back on the blog.

It's been a while and I'm a bit rusty, but seeing as I'm a contender in the Irish blog awards, no doubt thanks to Cigar Loving Doorman, I though I'd increase my chances ten fold, and post something brilliant for a change.

That said, this entry might have peaked already, as I rack my brains and struggle to remember what great things I was surely up to over the past month or so.  I guess though, like most people, my main focus was of course, the Olympics games.

I didn't bother with training or anything like that.  I thought I'd just rock up and ask whats the story, any chance of competing or wha'?, seeing as I didn't get any tickets an' all!  Maybe one of the athletes has pulled out or forgotten or met with an accident perhaps? No?

Surprisingly enough, that plan didn't work, so I guess I'll just have to wait another four years until Rio.  Probably a better chance of getting tickets for that one anyway.

As mentioned, in case you didn't pick up on it, was the fact that I, like millions of Londoners, got not a single ticket I applied for.

So as I prepared myself for a few weeks of sitting on the couch and watching the games on the telly, I wasn't feeling at all bitter when Joe phoned to say he had tickets to the Victoria Park opening ceremony party, and tickets to the boxing, if we wanted them that is.

We wanted them alright (thanks very much Joe), and first off we enjoyed the brilliant atmosphere of opening ceremony, a mile or so from the Olympic park, which had a Red Arrows fly-past, and all sorts of wonderful things going on, followed a week later by a trip to the Excel where we watched Katie Taylor box her way into an Olympic final, which she thankfully went on to win.

We also got to see the legend that is Damien Duff, who seemed to be walking around a lot, more than was strictly necessary I'd say.  At the time, I thought he was just playing the crowd.  But alas, as it turned out, the poor man just couldn't find his seat.

Across a row he went, across another row, then another.
Down to the front he went, he stopped, he asked for help.
He talked, he turned, he smiled.
He walked back up to where he came from.
He was right in the first place.
Eh hello, I think you're in my seat there Mrs...


The Excel arena was full of Irish supporters, and while there, I spotted one of my teachers from school.  I hadn't seen the man since 1989, so I wasn't too sure as I wandered over to say hello.

Turned out it was him, so hello again Eamonn Doyle, and Eddie O'Hara.  Very nice talking to you  both.

I nearly introduced Eamonn to the wife as Mr. Doyle, but as I struggled, he saved me by cutting in with Eamonn.

I did enjoy a few cigars on both occasions of course.  At Vicky park, I had a Ramon Allones Extra and a Partagas Petite Corona Especialle.  Both excellent, and the RA Extra proved itself an excellent outdoor smoke.


Although I also enjoyed quite a few cigars over the course of the Olympics, I've only got one worth mentioning.

This one had been sitting in the humidor for well over about 18 months, after my Dad brought it over from Dublin, after a friend of his brought it over to Dublin from Las Vegas.

When I got my hands on it, it was terribly dry, and I didn't think it would last.  So after leaving it alone in the humidor for those 18 months, I thought I'd give it a go, and I must say, it was excellent.

Maybe it absorbed some oils or whatever from nearby Cubans, or maybe it was just excellent to begin with, either way, it was very enjoyable, and burned slowly and perfectly all the way to the nub.

The cigar came from Vato Cigars, so please click on the link and check them out if you're ever in Vegas.

There's pictures below of the cigars, the Red Arrows and the results of some baking I've been doing lately.

Life in the fast lane.

Next time, I've got another eagerly awaited graveyard adventure with Jim to tell you about, a visit to Casa del Habano in Berlin, and top stories from Ibiza and Formentera. 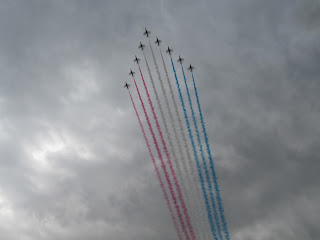 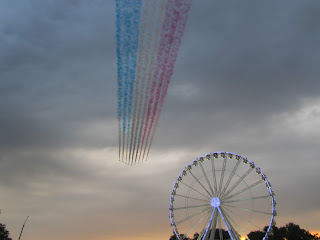 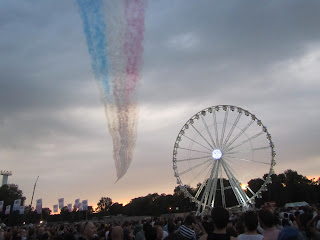 Posted by asdfasdfasdf at 14:54