What age are you!?

Although I'm told "How old are you?" is the correct way to ask the question, but I prefer "What age are you?".  I normally ask it with raised eyebrows and a smirk.


It doesn't matter which one you go for because apparantly, these questions are no longer allowed.  It's ageist you see and we can't have that.

Every man knows that you never ask a woman her age, unless I suppose, you suspect her to be under age, then you probably should.  I'm not sure the judge will let you off with a warning when you tell him a gentleman never asks.

I don't have to ask John Doyle his age because I know he'll be 40 on Saturday.

I don't have to ask my wife her age either, because I know that one too.  Shes...younger than John.

I'm a couple of weeks behind John and so I leave my thirties behind very soon too.  I don't mind turning 40.  What's to mind?  I've had a great time in my thirties and look forward to more of the same in my fourties, only less clubbing and more sleeping.

I've just been told that I didn't do much clubbing in my thirties, that was my twenties.

We're off to celebrate John' big day in Luxembourg tomorrow, and to help with the celebrations, I've a few choice Birthday cigars lined up.

I wanted something special for John, plus some new cigars for myself, Raul and Barney to fight over.

WARNING!!!  SPOILER ALERT JOHN!!
.
.
.
.
.
.
John gets a nice Cohiba Siglo III.  I thought Raul and Barney might enjoy a Regius Robusto or an El Rey del Mundo, which leaves a Camacho Corojo Toro Cello for myself.

The Cohiba looks great and I think John will enjoy it.  The little El Rey looks like a little power house, short and wide.  The Comacho is completely new to me.  It's quite dark and interesting looking and big also.  The Regius was selected because Regius put a link to my blog on their website, so I think they deserve it on that alone.  I did enjoy it last time so I know it's good enough for the celebrations to come.

I mainly picked these cigars thinking that they would suit the boys so I hope I was right.

Luxembourg is a great place for cigars and I'm really looking forward to picking up enough to get me through the next six months at least. *coughBirthdaypresentscough* 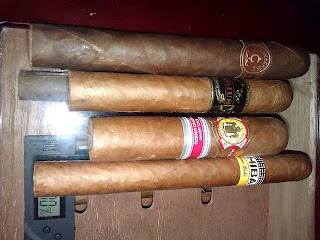 Posted by asdfasdfasdf at 09:40