Not the video game, or the musical for that matter.  I'm talking Grand Theft Auto, the crime.

This is the all-too-common tale of a young boy who walked the fine line between good, and the not so good.  This boy knew no bounds.  His bedtime was 9:30pm, but sometimes he stayed up till way past 10.

They say he fell in with the wrong crowd.  He went into creche a baby but came out a toddler.  He knew all the tricks.

Those of us that were there that day will never forget what we saw.

Nobody saw it coming.  These things just don't happen around here.  They only happen in the movies.  Nothing could have prepared us for what happened next.

The innocent owners of the cars never knew a thing.

Their Mammy witnessed everything, but said nothing.  Too afraid to talk.

This was not a motiveless crime however.  The car's owners were asked to share some of the dozens of cars in their possession.  They refused.  They paid the price.

To celebrate my Son's criminal coming of age, I decided to contemplate his actions, by enjoying a Grafton Reserve Robusto followed by Ramon Allones Gigantes.

The GRR is only available to the Irish market, so they say, and who am I to doubt this claim.

I've had a few GRR's on previous visits and they were always nice, but this was my first GRR robusto.  The others were smaller but I was expecting more of the same.

The cigar started off well, with a strong chocolate flavour, a bit like hot chocolate.  This stayed for the first quarter and then things got a bit plain after that.  Not bad but nothing special.  The last third became very harsh and basically unsmokable, so I had to let this one go early.

The RAG was great.  These are priced at €14 in Luxembourg and don't seem to be available  in the UK.  It's a fine cigar and went well with two bottles of St. Peters Best Bitter.

After much contemplation, I forgave the car thief his crimes, on the condition he doesn't move on to Grand Theft Cigars.

I don't know where he gets it from, but I blame his mother. 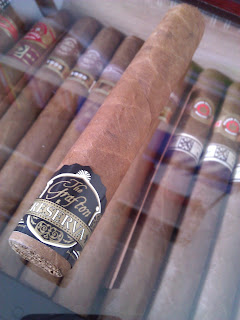 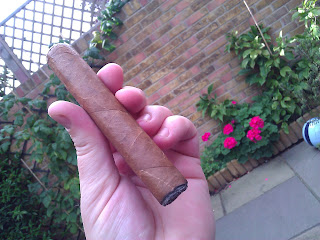 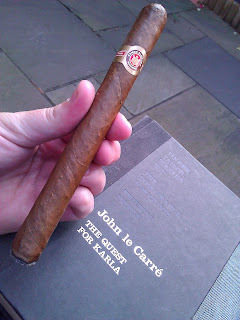 Posted by asdfasdfasdf at 11:35