No, not new edition, the nineteen eighties progenitors of the boy band revolution, but a new edition to the family.  A baby boy to be exact.  Born recently at the Royal London, Whitechapel.  A little under a week early in making his appearance, but no harm done, and so everything, including his mother, is fine.

Before I carry on, I have to say that it wouldn't be fair of me to blame my blogging tardiness on this young chaps arrival, and I do have a lengthy update that's been almost ready for over a month, but I just couldn't bring myself to finish it.

The reason for my reticence was the negativity that dominated the post, which was down to a bad experience at Casa del Habano in Berlin.  So I'll park the negativity for now, as it goes against my natural sunny positivity, and concentrate on happier, more important things, like the new edition celebration cigars that I've been enjoying for the past two weeks.

So, without going into too much detail, the baby made a surprise appearance, and with the wife in hospital, I found myself in need of a short notice emergency babysitter for our first born, so I could be were I was supposed to be.

Joe saved the day, before handing over to my mother, who flew over from Ireland the following morning.  The day after that, and we were all home from hospital, and I could get down to the serious business of enjoying my celebration cigars.

Seeing as I now had two sons, I decided two cigars were in order.  First up was a Cohiba Siglo VI, which was a present from Gearoid last Christmas.  He must really love me because it's a cracking cigar.

I'd been keeping it for a special occasion, and as a new child is as special as they come, it was the cigar of choice.

The Siglo VI is one of my favourite cigars.  A nice big cigar, with a perfect burn and perfect construction, and a great cigar to kick off the celebrations.

Next up was a Montecristo Open Master Eagle, which is the same size as the Siglo VI, and a fine cigar too, but not quite up to the same standard as the Cohiba, in my opinion anyway.  Still a great cigar and worthy of it's status as celebration cigar number two.

With the first days celebration out of the way, and two weeks paternity leave staring me in the face, I lined up more celebration cigars, a few of which I'll cover off now...

I apologise for the lack of picture quality in these photos, but I'm happy to say that all future photographs will most likely be taken on my spanking new Canon 650D DLSR camera, which was purchased to specific reason of sprucing up the blog.

I obviously told the wife it was for taking baby pictures, and so far, that's all it has done, but I'm sure it will be doing it's first cigar very soon.


Anyway, on to the cigars.

This one, which for some reason, I've photographed with a pot of uncooked potatoes in the background, is a Romeo y Julietta short Churchill.

A fine cigar.  Another one of my favourite cigars, and one that I highly recommend.

This was the last one of it's kind in the humidor, so I'll be looking to stock up next chance I get.

The potatoes weren't bad either.

This fine cigar, paired with a fine French wine, was a Vegas Robaina Unicos, and another excellent smoke.

Described as a medium to full cigar, I found it rather mild, but absolutely fantastic, and totally enjoyable.

I've been told that Robaina are known to produce the best tobacco in Cuba, and Alejandro Robaina is the only tobacco farmer to have his name on a brand, so you can't argue with that.

I do have a soft spot for these cigars, especially since that nice man in Jordan handed me one, and it was he who told me all this, including the fact that they supply Cohiba with tobacco, so it must be good.

Truth is that Vegas Robaina cigars have never disappointed, never let me down, and always remind me how good cigars can be.  The wine was a little bit lacking though. 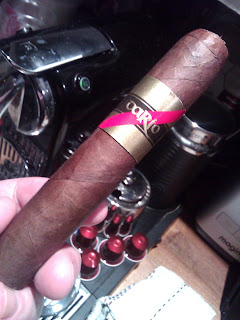 I picked up this cigar in Ibiza.  No idea what it is, only that it's not a Cuban.

I liked the look of it, and for want of a new experience, I picked up this one, and another similar cigar but with a much lighter shade wrapper.

The other cigar was pretty good, and so was this one.

Nothing magical, but a pleasant smoke which I enjoyed to it's nub.  No heat or harshness, and good value for money.

I have coffee in the background this time.  It's decaff.  Not what I usually go for.  I'm more of a ristretto man.  (That's a in-joke between myself and George Clooney btw) 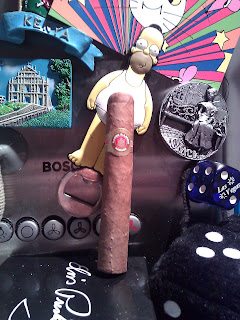 This is one of the better photos taken on the phone camera, which shows a few fridge magnets, and a Ramon Allones specially selected.

The RASS is my favourite all rounder cigar.  This one had a deep old cigar smell, which I enjoyed pre-light.

I love it when I get a cigar with that particular smell, as it isn't every cigar that I can honestly say I get a smell from, whatever that smell might be, good or bad.

This RASS is from a batch the wife bought me back in February, which were described as five year olds, so there was never any doubt this cigar was going to be excellent.

I've only got two of these left and I'll be sorry when they're all gone, so I might have to get a few more of these in too.  I'll be in touch with my man in Luxembourg regarding a shipment very soon.

Last but not least, is a photo (taken on the new camera) of the bundle of joy, myself and the wife were blessed with recently.

I'm still on paternity leave, so I'll be having at least one more celebratory cigars before the week is out.  Or more probably before the night is out. 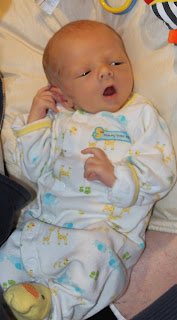 Posted by asdfasdfasdf at 13:00