Those are Fake Cigars

Jordan is a great place that everybody should visit at least once in their lives. It has Petra, Wadi Rum, the Dead and Red Seas, the place Jesus was baptised, the pillar of salt that became of Lots wife, and it's also the home of Ali Baba and the forty thieves.

The one thing it's doesn't have though, is a Casa del Habano or equivalent, which is a bit disappointing seeing as Aqaba is a tax free zone, with electric goods, cigarettes and alcohol in plentiful supply.  Cigars however are not.

I tend to walk around with my eyes closed and as such it's possible I might have missed something, but the wife sees and knows all, and so it's unlikely she would have missed it too.

The one and only shop we did find sold me Ricki cigars (Ricki Lake - Fake), so this post is on that subject, and the products purchased from Ali Babas.  I have to take some of the blame I suppose, because my greedy eyes were focused purely on the bargain price, and not on the tell tale signs.  So while I thought I was getting a bargain, I ended up with egg on my Ricky (Ricky Gervais - Face).

First off, my advice when travelling the world is to bring your own cigars, so if you haven't already got one, get yourself a travel humidor.  Mine holds ten cigars, but the humidifying sponge bit can soak into the cigars it covers, so I put tubed or small cigars in the middle, or nothing at all.

Secondly, bring more than you think you need.  If you don't smoke em', you can always take them home again, but if you run out, and can't find a shop, you have nobody to blame but yourself.

Travel tip number three is to keep old cigar tubes so you can pack more cigars in your Brendan (Brendan Grace - case), should your travel humidor become full.  I never check-in my travel humidor, but if you're bringing Cuban cigars into places Cuban cigars are not allowed, make sure those cigars are in your checked in luggage.  Cutters, matches and lighters should also be checked in and not shoved down your Adam and the Ants.

So, on to the evidence.

Before I paid for them, I examined the cigars for damage and firmness, and although the Behike had a pigtail, I remember thinking it was a bit on the small side.  This visual clue should have had the alarm bells going but it didn't.  I also remember thinking the cigar had a darker wrapper leaf than I remember, a lot darker, but once again, I was blinded by the price.

The other fake Cohiba bands have obvious flaws too, some more obvious than others, but in all cases, you don't need a degree in Cuban cigar bands identify them as fake.  They all have something askew, misaligned or smudged in different places.  Another giveaway was that cigars that were supposed to be the same, were different lengths.

Anyway, I was robbed, so I'll leave you with the photographic evidence of the impostor cigar bands. 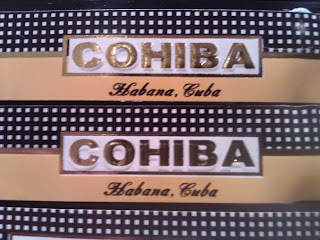 The first one has flaws with the embossing where you can see the gold print is not flush with the embossed letters.  This fault was consistent across all the bands. 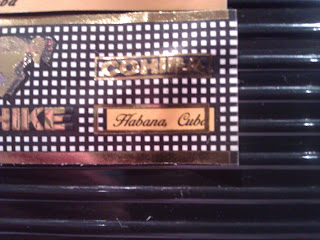 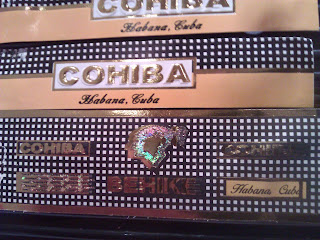 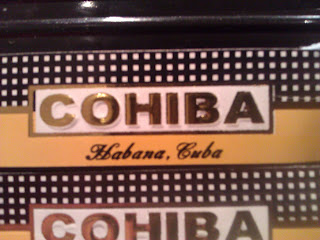 The Behike band is all over the place where the golden head is in the center.  This looks dirty but the other big tell is the gold rectangle box which doesn't quite surround "Habana Cuba".

The last picture shows hows the the gold box around "COHIBA" is not exactly square with the white square dots.  Real Cohiba bands would not be flawed in any way.

Posted by asdfasdfasdf at 15:18