Over a year ago now, myself and Jim began our epic journey together, to conquer London' magnificent seven cemeteries.  A mammoth task, even for the likes of us.

Each visit would require careful research and detailed planning, such as who to say hello to, and which local pub sold the best best bitter, and had the best beer garden (cigarden henceforth).

Before I go any further, a quick historical recap if I may...

The magnificent seven cemeteries came about when Londons dead began overflowing church grounds into water supplies, and down the new sewer system.  So with the ground literally bursting at the seams, the solution was to surround Victorian London with magnificent graveyards, while putting an end to the use of church grounds for new burials.

This was done over a ten year period starting in 1832, but it wasn't for another 150 years, until after the movie was made, that the cemeteries got their name, the Magnificent seven.

Abney park was the first site we visited, and you can read all about it here...

This time we headed for the City of London Cemetery and Crematorium.

While not a member of the magnificent seven club, it certainly has as much history, character, beauty and interest as the others, probably more in fact, and as it was easy to get to, or so we thought, we selected it as our next destination.

For the record, at the time of choosing, I had no idea that it wasn't one of the M7.

Anyway, a long story short, myself and Jim met up at Liverpool street station, on a warm and sunny morning.

We had four stops on the train ahead of us, followed by a short walk.

Eight stops later, we felt something wasn't right, and wondered if we missed our stop.

Jim checked his iphone, then announcing that we should have gotten off about twenty minutes ago.

Some time later, we reached the fabulous gated front of the cemetery, and were greeted by a gentleman kitted out in the city of London uniform.

Interesting factoid this.  Even though the city of London is miles away, the grounds, which is one of the largest municipal cemeteries in Europe by the way, is still part of the city of London.  That said, you don't need to live in the city to be buried here.  It takes everybody.

We arrived, but we didn't know where to go, what with 200 acres of landscaped cemetery standing in front of us.

The gentleman enquired if he could offfer some assistance.

So off we skipped, with nothing but a vague idea and a map the gentleman had given us, in search of our heroes.

We found Sir Bobbys memorial, and a stunning little plot it was too.  The great man was cremated somewhere else, but his ashes are resting here.

We found plaques belonging to two of Jack the rippers victims, Catherine Eddowes and Mary Ann Nicols, and lots of memorials to old churches and graveyards whose inhabitants were re-interred here.

These re-interments are fascinating and a story to themselves, mostly down to the union of benefices, but the real crowd pleaser was finding the plaque to the aforementioned Fenian, Michael Barrett.

This poor unfortunate was publicly hanged for killing a load of people when trying to blow a hole in the wall of Clerkenwell prison.  An accident then, but it didn't go down well with the locals at the time, and that was pretty much that for him, and for Londoners sympathy towards the Irish cause, which did exist at the time.

There was some doubt as to his guilt too, seeing as he was in Scotland at the time of the blast, but in 1868 outside Newgate prison, they hung him anyway.

Newgate prison made way for The Central Criminal Court, which we all know as the Old Bailey, and as such, the communal lime grave was relocated to the city of London cemetery.

Fifty souls were removed and placed in a hole in the ground.  End of.

After the cemetery, we retired to the pub, ordered food, and took our beers to the cigarden.

I blazed up my Partagas Serie D No. 4, and the resulting conversation with the bloke at the table beside us went like this...

As Jim lights up his Partagas Petit Corona Especial.

Me: Eh yeah, it's just a Partagas
Jim: yeah, they're just cheap Cubans

So, at this stage I'm feeling suitably insulted, but I mostly hate this bloke.

Bloke (after a minute of intense silence): Well, maybe they're not the worst.
Bloke:  Yeah, their starting to smell OK after all.

With that, they all got up and left.

Me: What a dick
Jim: Idiot.

So, as I calmed down, we began to wonder where our food was.

So, as we supped our beers, and smoked our cigars, an old lady shows up and asked for a light.

We have a selection of lighters, two of which are jet lighters, so I suggest she uses the normal lighter, or risk losing her eyebrows.

Old Lady:  Is that an accent I hear?
Me: Yes it is.
Old Lady: Where from?
Me:  Dublin
Old Lady (looking disappointed): Oh...

Old Lady (looking back):  I thought it was North of England...

After being insulted for the second time, I reply with something nonsensical, then ask Jim if she means Manchester, or Newcastle?

That was enough of that.  We finished our pints and made our way back to Liverpool street, back to civilisation, and decided to call it a day.

Myself and Jim hope to finish the magnificent seven cemetery tour by 2017. 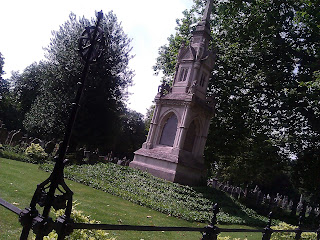