I'm way behind on my blog so I've decided that the only thing to do was to cover the last few weeks in one go.  So this will be an extra special action packed edition, even more so than normal.  Hold on to your boots.

Straight after the Spanish beer and meat festival, we had the normally tranquil affair that is St. Patricks day.  This time around, it was pretty much that and we made do with celebrating with food rather than beer.

I was going through a bit of a baking phase back then, so what better pie to bake on Paddys day than Guinness pie.  It goes without saying that my pie was a glorious success, even if it did appear a bit shallow due to the massive crust towering over it.

The wife and Donnacha baked some Leprechaun (fairy) cakes and I chilled some Guinness in the fridge, and we were soon celebrating Paddys day in style.

The cigar for the day was a Vega Robaina Maestro from Madrid.

A Cuban cigar which I think is a Spanish regional selection, and a quality cigar that I couldn't fault.

It's a 50 ring gauge and longer than a normal robusto, lasting just over an hour.  The burn, smoke and flavours were all good and it held everything together throughout.

Here it is pictured with my superior pie, some Leprechaun cakes and a pint of plain.  Top marks all round.

Next up was a La Aurora Rothschild, which is a small non-Cuban cigar that comes in a cellophane wrapper, and another of the Madrid cigars.  This being my first ever La Aurora and after following a lot of their reps on Twitter for the past year, I was eager to enjoy this one.

Once again though, my expectations were much higher than what I got, and I was disappointed by a smoke that left me feeling a little bit sick.  The tobacco was pretty overpowering and not smooth or enjoyable in any way.

This is a four inch cigar, which I let go just over half way through, as it was pretty much unsmokeable, so thankfully the whole experience didn't last very long.

I picked up two of these smokes in Madrid, and for €2.80, I can't fault the price.  I'll leave the other one alone for a year and hopefully it'll improve with age.  It certainly can't get any worse.  Marks out of ten?  Two.  One for appearance and one for price.

I wouldn't write La Aurora off based on that cigar alone, but I came back in from the garden telling my wife I was sticking to Cuban cigars only from now on.

I've been at this cigar smoking lark for the last year and a half, and I've always thought of people who only smoke Cubans as cigar snobs.  When I started out, the plan was to try as many different cigars as possible, but that opinion is changing as I now notice big differences between Cuban and non-Cuban cigars.  Maybe that comes with experience, or maybe it's just taking me and my palate a while to realise that.

I've always thought of myself as a bit of an artist.  It's not something I like to talk about and I wouldn't normally show any of my work in public, but I'll make an exception on this one time. 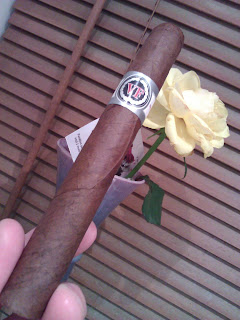 But before that, back to cigars.

So far, I was only two cigars into the Spanish selection and with one hit and one miss, I was struggling to pick out another non-Cuban to smoke, until I remembered how much I enjoyed the tubed Vegafina Summun Rolo brought to Luxembourg one time.

Instead of a Summun, I went for a different Vegafina, but this one didn't disappoint like the La Aurora did.  A nice long cigar, with good construction and an easy draw.

I have to say that so far, all the Vegafina cigars I've smoked, of which there have been about five, have all been excellent.


This turned out to be a finger burner, which is something I hope for in every cigar, but not something you always get.

Another winner this time though. 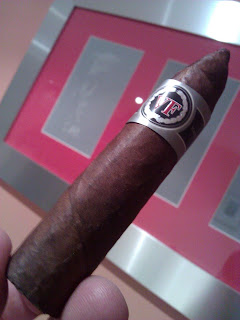 The second Vegafina from Madrid was a short Belicoso.

Again, after the La Aurora, I wasn't expecting much from this one, especially as it was a similarly small sized, but I was wrong, which in itself is unusual.

Another top quality cigar from Vegafina, and my faith in non-Cuban cigars was restored.

The picture opposite shows the lovely dark colours of the wrapper, and the cigar pretty much smokes as good as it looks.  Once again, no complaints.

Oh yeah, I nearly forgot.  The bit of art you've been waiting for, is a still life I did of one of the guys in work.  I don't want to embarrass the poor man by naming him here, so lets just call him Stephen.

It comes from one of my more reflective Tuesday morning post-coffee moods.


I can't concentrate while looking at that face, so I'll leave it there for now.  Until next time.